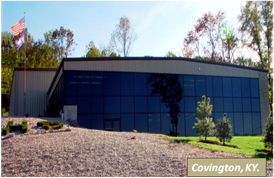 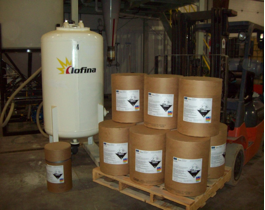 Iofina Chemical, Inc., since its founding in 1983 continues to be very dedicated on research and development. In close cooperation with its customers Iofina stays on the leading edge of its technologies and strives to deliver its customers the products and solutions they need. It recently added an isotainer loading facility for one of its core products. Iofina Chemical is a proud member of SOCMA and is ChemStewards Certified. Iofina Chemical is an EPA registered facility manufacturing biocides for various applications.

• 3-iodo-2-propynylbutyl carbamate (IPBC) – is an iodine-based biocide that serves as a preservative for the lumber and personal care industry as well as fungicide for oil-based and latex paints.
• Hydriodic Acid (HI) – is an iodine based chemical used to produce sanitizing products (iodine antiseptics). It is also used as a catalyst in the manufacture of other chemical products (including acetic acid). This product is used in the pharmaceutical and dairy industries.
• Methyl Fluoride (MeF) – is a specialty gas utilized in the etching of silicon compound films for semiconductor and electronic products.
• Methyl iodide, also called iodomethane and commonly abbreviated “MI” (CH3I) – is a chemical used in the acetic acid production and manufacturing process. In the 1970s, Monsanto developed the rhodium/iodide catalyst system for methanol carbonylation. In 1986, ownership of the Monsanto technology was acquired by BP Chemicals, which further developed the process. Methyl iodide is also used in pharmaceutical and various chemical processes as a methylating agent
• Trichloromelamine (TCM) – is an EPA registered sanitizer/disinfectant used in the food and beverage industry and for other disinfection applications.
• Chloramine-T (CHT) – is a chlorine- based chemical used in a variety of biocide applications as well as antiseptic products. It is a very effective odor control compound and is currently an investigational animal drug used in the aquaculture industry.