Iofina iodine is marketed under the brand names IOflo® and IOprill® based on the form desired.

Contact the Iofina Chemcial sales team at [email protected] or 859-356-8000 for pricing and availability.

Iodine is a shiny, blue-black, solid element, which derives its name from the Greek word ‘iodes’ which means ‘violet’ in reference to its colour observed in the gaseous state. It has an atomic number of 53 and forms one of the halogen group of elements.  Iodine is essential to many forms of life, including human, and is found in thyroid hormones. A lack of iodine in the human body results in a condition known as ‘goitre’ in which the thyroid gland in the neck becomes enlarged. In order to assure an adequate amount of iodine in the diet, table salt in many countries is routinely iodized. Iodine is also used as the core commodity in a wide variety of products and in many cases there is no substitute

Iodine is included in the element list of the lesser 1/3 in abundance and is therefore classified as a rare element. It is classified as a non metallic element – showing that it has little of the characteristics of metallic elements. Its appearance however is metallic, dark bluish black in color. It is a solid, not a liquid or gas like the halogens above it in the periodic table. It is however volatile and therefore when heated it sublimes to a purple vapor. It is included in the seventh column of the periodic table, fourth in this halogen column. It has a characteristic odor and a sharp acrid taste. Like the other halogen elements it is diatomic, meaning that in its atomic state there are two atoms bound together to give one entity referred to as I2. Elemental Iodine can easily be reduced chemically or electrochemically to iodide ion by the addition of an electron, and can easily be oxidized chemically or electrochemically, yes by removal of from 1 to 7 electrons. It is quite interesting that both the addition of one electron and the removal of from 1 to 7 electrons eliminate the color of elemental Iodine. This interesting fact is extremely useful and used extensively for a number of analytical procedures for Iodine analysis. It is also interesting to note that Iodine is slightly soluble in water; however the addition of iodide ion increases the solubility in water substantially. Iodine’s atomic diameter is quite large and heavy. Its size and weight and physicochemical parameters significantly affect its chemistry when compared to other halogens and make it a most unique and interesting state of elemental matter to work with and include in the development of useful value added products.

In addition to the inorganic chemistry of elemental Iodine there is another class of quite different and interesting chemistry involving bound or organic Iodine chemistry. Iodine combines with other elements such as carbon to produce what is referred to as organo Iodine compounds or organic iodides.

Due to its high reactivity, iodine forms numerous compounds which have a wide variety of medical and industrial uses. Iodine is also considered to be an essential element to human growth. The Institute of Medicine has set the Recommended Dietary Allowance (RDA) for iodine in adult men and women at 150 μg per day. Iodine also has an excellent ability to absorb X-rays and as such is frequently used as a substitute in the production of various diagnostic contrast-media.

Iodine, being a simple substance and having an anti-biotic function by nature, is used as a raw material for the production of various bactericides or disinfectants. Iodine compounds are added to table salt and feed to treat and prevent “iodine deficiency symptom”. Iodine also has a wide range of other uses, for example, in photo-sensitisers, catalysts, stabilisers and polarising films on the liquid crystal display. 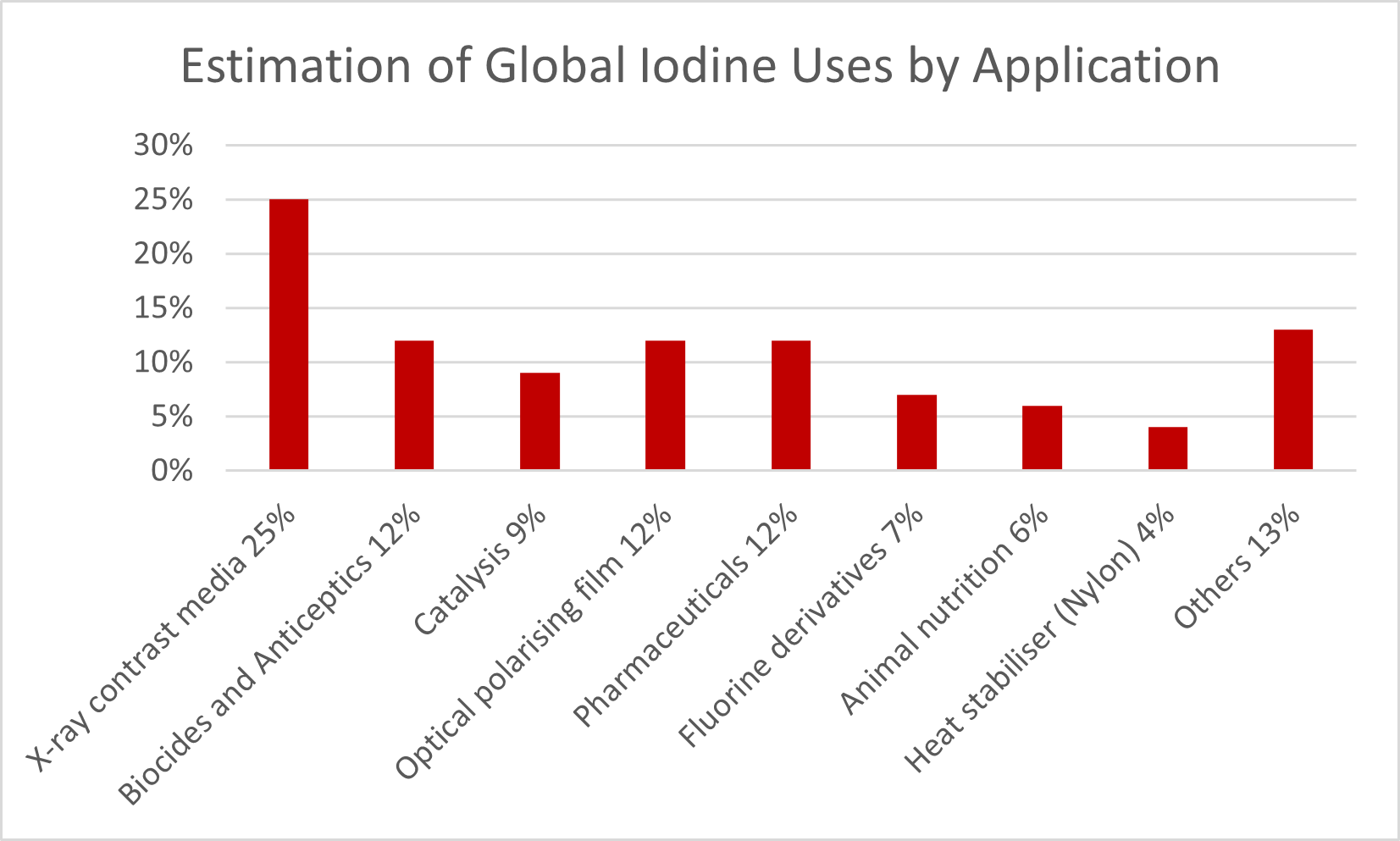